The Greatest Joys Of Life Are Happy Memories. Our Job Is To Create As Many Of Them For Our Campers As Possible. 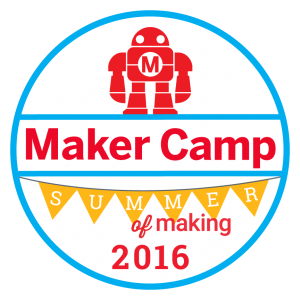 “Tell me and I forget. Show me and I remember. Involve me and I understand.” ―   Chinese Proverb

Learn More About Our Camp & Schedule 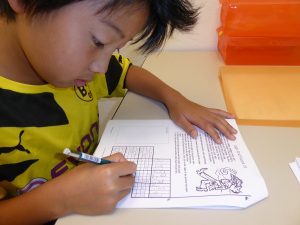 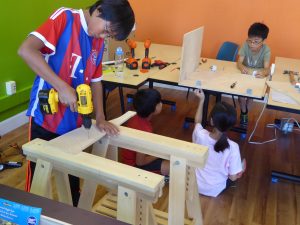 Welcome to our first week of camp! During our Math Camp this week, our campers used their new acquired techniques to solve logic puzzles by using grids and truth tables. Our campers also honed in their process of elimination skills with Sudoku. In our STEM/Maker Camp, our campers first learned how to create mechanical drawings in different perspectives, then they designed and hand-crafted their own Segway prototype to experience what works well and what were the challenges. At the end of the week, as a team, they designed and made a real-life Segway that is powered by power drills. During break time this week, our campers took on the “30-min” quick fire challenge to make a wind propelled two-wheeled mobile. At other breaks, our campers create with their 3D doodle pen. 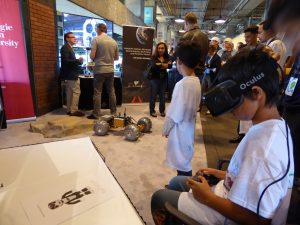 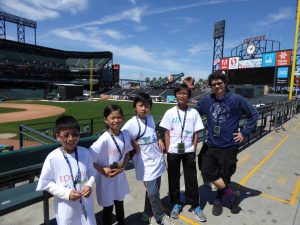 We had such a fun day! We took a field trip to the Shape Expo at the AT&T Park to check out the latest happenings in cutting edge technology. Our campers had the opportunity to explore various areas of the technological landscape such as robotics, virtual reality, and wearable fabric with LED lights just to name a few . They were able to see the future being shaped through hands-on demos from the exhibitors. All our campers were excited to test drive a virtual reality controlled rover developed for NASA’s space exploration missions. Two of our campers were invited on a taped interview to talk about their experience after trying out one of the exhibitor’s robots. They were sharing their new gained insights like a pro! The highlight was, of course, the Maker Camp Live. It is designed for kids who enjoy hacking, tinkering, learning, crafting, and making. It combines the best parts of summer camp with starter projects. The campers got to try out some of the Maker Camp projects that are also offered through our academy. 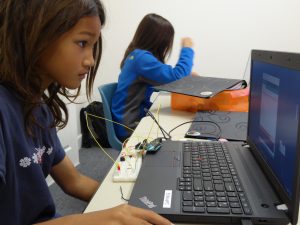 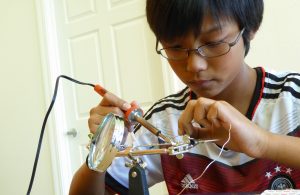 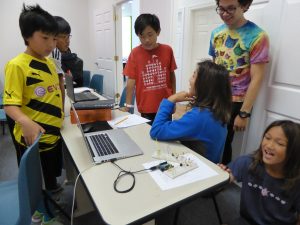 Welcome to week 2 of our summer camp! We learned so much this week. During Math camp, campers learned how to count using counting principle, permutation, and combinations. They learned about how a circle relates to periodic Sine and Cosine waves. We talked about the relation between period and frequency. We also talked about scientific notations. However, the most fun had to be seeing our campers learned the concept of different number bases and how to count in base 2 up to 1023 (2^10 – 1) with their fingers. In our STEM/Maker camp, our campers learned basic circuit concepts and how to read simple schematics. They first prototype their circuits with breadboard. Once successful, they moved onto producing the same circuit by soldering. They also learned how to replace the 555 by Ardunio and do sketch programming. They each were tasked to program their own traffic light. Then our campers where challenged to team up to synch two traffic lights so no accidents will happened. We are happy to report that our campers were all successful in this mission. At the end of the week, each camper picked their own simple tunes and they used a breadboard, a buzzer, a few connection wires, and Audrino to program their chosen tunes. During break time this week, our campers took on the “30-min” quick fire challenge to design and make a slingshot with rubber bands, masking tapes, paper clips, and Natural Craft Stick that would project a certain shape dart. At other breaks, our campers create with their 3D doodle pen. It was such a fun filled week with laughter and music. 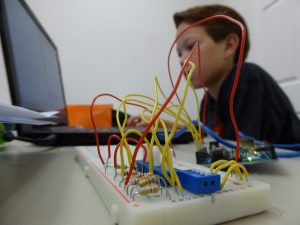 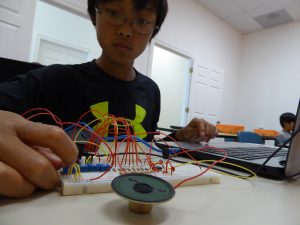 Welcome to week 3 of our summer camp! We are all about making sound and understanding wave this week. During Math camp, campers learned about basic Probability Theory. They also learned about how a circle relates to periodic Sine waves. We talked about the relation between period and frequency. We also talked about basic wave forms such as sine, square, triangular waves. However, the most fun had to be seeing our campers learned the concept of different number bases and how to count in base 2 up to 1023 (2^10 – 1) with their fingers. Learning how to convert a number from base 10 to base 2, 8, and 16 turned out to be a fun game! In our STEM/Maker camp, our campers made a sound synthesizer using Arduino. Campers used Arduino to generate 3 basic waveforms (Sine, square, and triangular) and modulate them to produce the final synthesized waveform. Arduino then sent the final synthesized waveform to a D/A converter that they have built on their breadboard. Campers also put in dials for each wave so they can adjust the frequencies. After undergoing the low pass filter, the synthesized wave arrived to the speaker. We are happy to report that our campers were all successful in this mission and for a good 15-20 minutes the classroom was filled with different sounds produced by their newly built synthesizer. 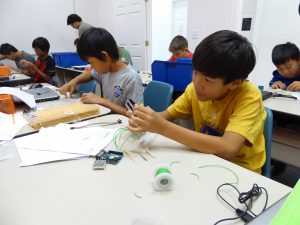 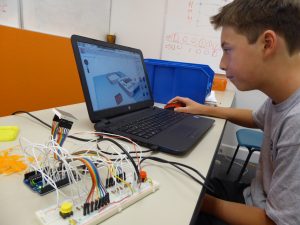 Welcome to week 4 of our summer camp! We almost have a full house this week! This week we are creating game. We are all about designing and creating a pong game. Campers created their own pong game using Arduino to drive a circuit with an 8×8 LED matrix. The 8×8 matrix sits on a breadboard that is connected to 2 buttons so the player can move the pong stick. We are happy to report that our campers were all successful in this mission. Every afternoon during pick up, our campers would rush to show their parents their progress on the project. Of course at the end of the week, our campers challenges their parents to a pong game they created before we bid our happy week goodbye. However, the fun and creativity did not stop there. We took a break from Math this week and did 3D design and printing instead. Our campers learned how to create using TINKERCAD for one and two color designs, saved files in .STL format. Then the files are converted info .x3g files so we can print from our dual extruder 3D printer. Among all the things they tinkered on, they have designed and printed key chains with their names on it, two interlocking shapes that do not touch each other, one shape inscribed in another shape that do not touch each other while the inscribed shape would not fall out of the circumscribed shape. The high light comes when they customize their own Arduino case. Our campers this week went home with loads of fun and load of their own customized 3D print creations.